In a previous post I mentioned that Prometheus has a number of ways to discover services. This ranges from statically defined configuration to consuming APIs from different cloud providers. So far, we have covered: -

In this post we will cover discovering services running on OpenStack.

OpenStack is a way of running your own Infrastructure-as-a-service platform. It enables you to deploy compute, storage, networking and other resources similar to the major cloud providers. It began as a joint venture between Rackspace and NASA to provide an Open Source cloud solution.

Initially, OpenStack was embraced by a number of different sectors of the IT industry. Some companies saw it as a way to become an alternative to the likes of AWS or Azure (eg HPE Helion, OVH, Huawei). For others, it enabled them to use their existing hardware while being able to spin up resources in a cloud-like way.

In recent years, OpenStack has become increasingly popular with telecommunications providers. Many of these providers own or have access to telecoms exchanges, and have large data centre footprints spanning cities, countries and even continents. OpenStack allows them to create multi-region clouds of their own, without the need to leverage a public cloud provider.

OpenStack usually requires a fleet of high-powered servers managed as a cluster (or multiple clusters) of compute, storage and other services. If you want to test out OpenStack on a single machine, there are multiple options available: -

I decided to use MicroStack on an Ubuntu 18.04 LTS virtual machine.

To install and run MicroStack, run the following commands: -

After a few minutes (ranging from 5 to 20 minutes, depending on your machine) MicroStack will have finished initializing. The web interface will be available at http://10.20.20.1: - 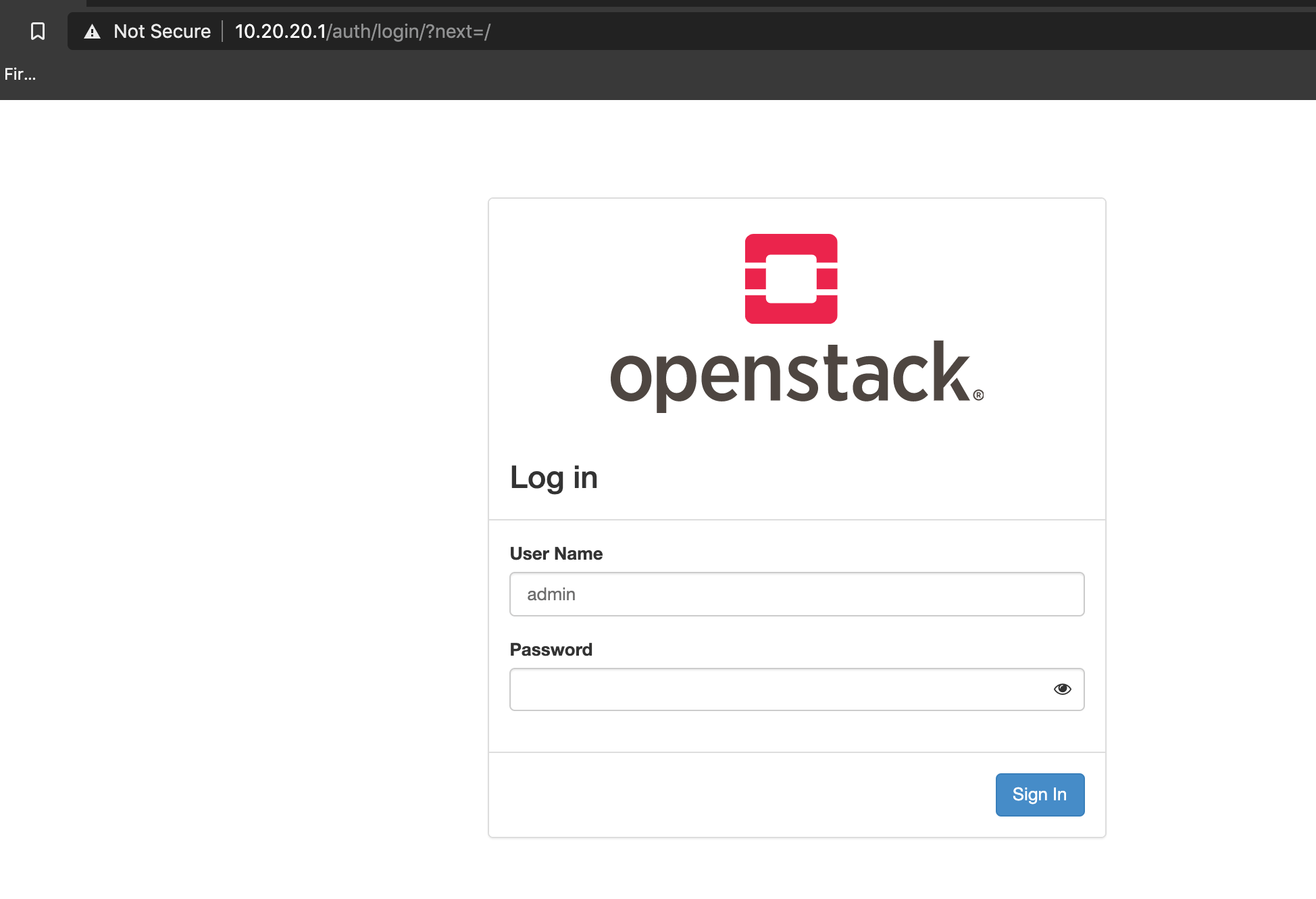 The credentials for this page are: -

You can create a virtual machine (instance) from here, or from the command line.

Notice that all the commands are prefixed with microstack.. This is because OpenStack runs inside a Snap package.

By default, MicroStack only includes the CirrOS image. While it is useful for testing that OpenStack can provision resources, it does not provide the ability to install packages.

Many Linux distributions create OpenStack-ready images, a list of which can be found here.

For this post, I used a Debian Buster image: -

This image (and many others) allow the use of cloud-init and cloud-config, allowing you to specify first-time boot configuration and package installation.

Terraform has an official OpenStack Provider that allows you to manage the resources on OpenStack. It can create everything from compute instances, object storage, containers and more.

For information on how to install Terraform and an examaple project structure, see here.

You can use OpenStack user credentials (even the admin account) with Terraform if you choose. However, using application credentials allows you to restrict what access Terraform has, and can be revoked and/or rotated if the credentials are exposed in some way.

To generate an application credential, you can either use the CLI or the web interface. 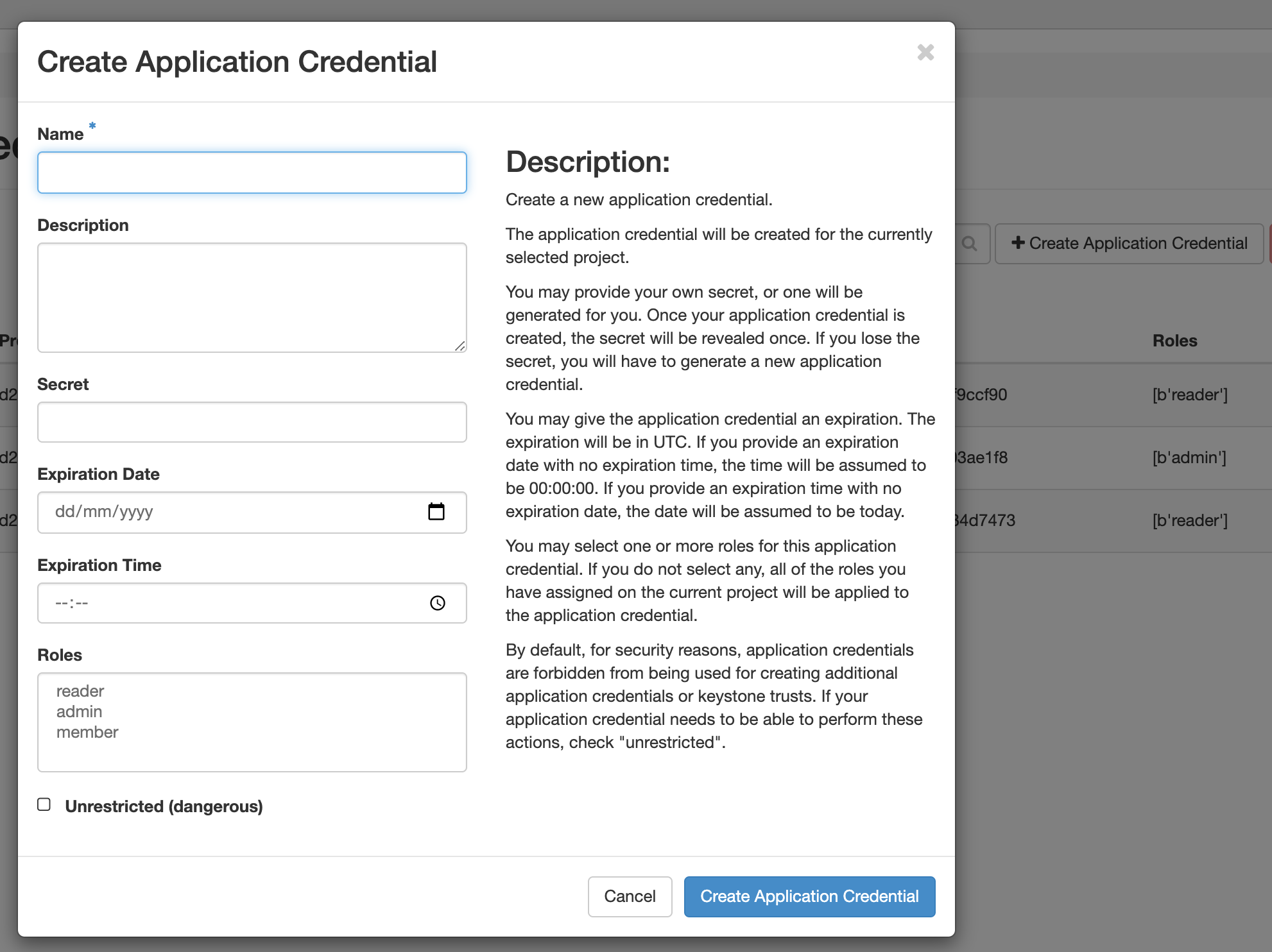 You can assign the application credential a member, reader or admin role. As Terraform will be creating resources, the admin role is applicable.

A couple of points to note here are: -

Either note down these credentials, or download them in a clouds.yaml file or an OpenRC file. The latter can be sourced in your .bashrc, .zshrc or the rc file for the shell of your choice.

In my Terraform directory, I have create a directory called openstack. In this directory, the provider configuration looks like the below: -

The user_name is admin because the Application Credentials were created within the admin account. If they were created for another OpenStack user, you would change this to the username for that account.

The region is microstack. This can be verified with the below: -

The tenant_id is the same as the project_id.

If you have sourced the credentials using the OpenRC file in the previous stage, you can remove all of the fields in the provider. Terraform will use environment variables instead. You would then have something like: -

After this, run terraform init to download the OpenStack provider, ready to start creating resource in OpenStack: -

You can now create the configuration files for your first compute instance. The below is from the file instance.tf in the terraform/openstack directory: -

To summarize what we are doing here, we: -

The user_data is defined using the same approach as here, but with the name changed to debian: -

The contents of the template are: -

We can now apply our configuration, and see if it builds an OpenStack instance: -

We can double check that Terraform is managing these resources now with terraform state list: -

We can check to see if the instance is in the OpenStack Console: -

Now that we have our Instance created in OpenStack, we can configure Prometheus to discover it.

Create an application credential for Prometheus

Prometheus requires an application credential to discover instances in OpenStack (see here). When creating the credential, assign it the reader role. The Prometheus user does not need to make any changes within OpenStack, only discover from it.

To allow Prometheus to discover instances in OpenStack, use configuration like the below: -

Some points to note here are: -

The other values are explained in the Terraform Provider section.

The tag relabelling configuration is similar to how we match tags in the AWS, Azure and Google Cloud Platform post.

We also use something called a label_map. Any metadata discovered that matches the regular expression __meta_openstack_(.+) will be added as a label to all metrics received from discovered hosts. If we look at the metadata discovered for the instance, this will make a lot more sense: - 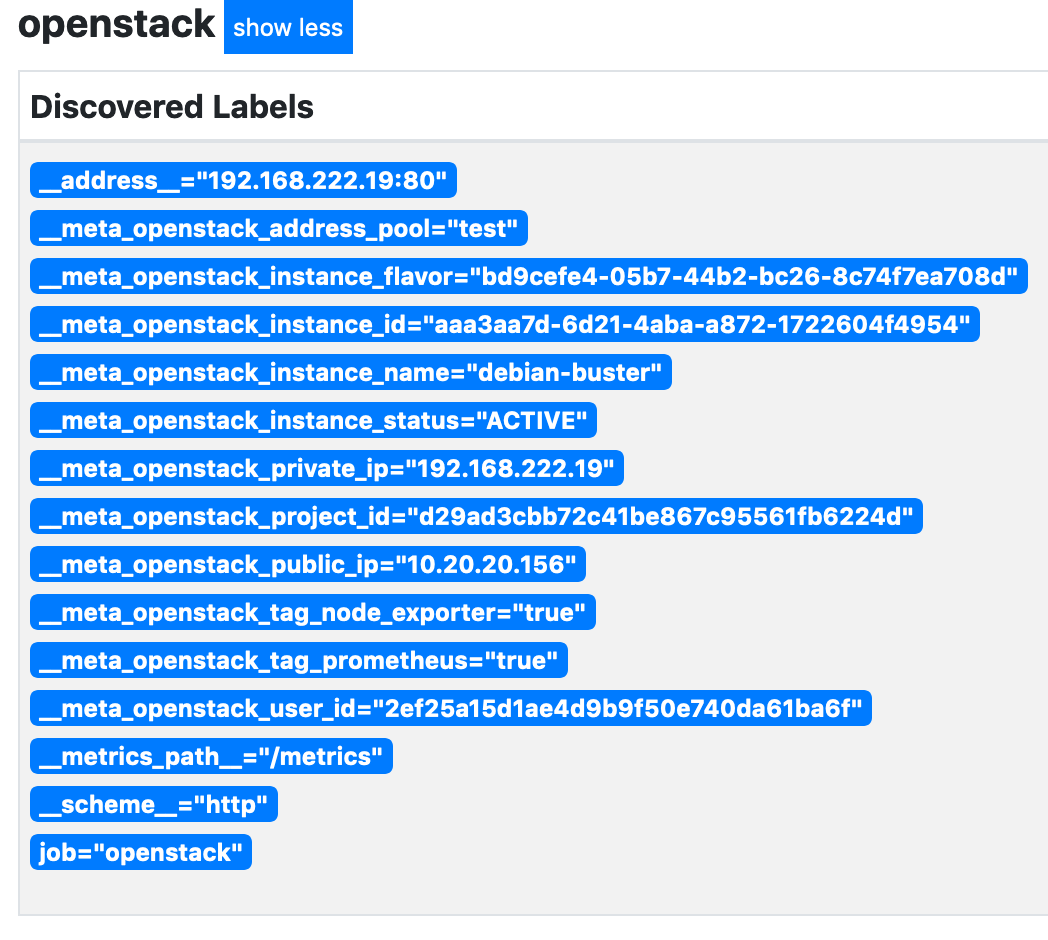 Every discovered label in the above that has the prefix __meta_openstack_ will now be added to the instance and all metrics: -

As we can see, we have labels of instance_name, private_ip, instance_status and more. Without the labelmap, we would only see the instance and the job.

If we want to monitor the hypervisor as well, we can use the following configuration: -

One point to note is that the hypervisor role requires higher privileges than the instance role. You will need to create another application credential, this time with admin privileges.

At this point, you could use only the Prometheus Node Exporter to monitor the hypervisor. If you need to gather OpenStack-specific metrics, then use one of the following projects: -

The prometheus-openstack-exporter project requires multiple Python dependencies to install it natively on the hypervisor. There is also the option of deploying it as a Docker container

The openstack-exporter project is provided as a single Go binary.

The openstack-exporter requires the use of a clouds.yaml file. When you create an application credential, you are given the option to download the YAML file: - 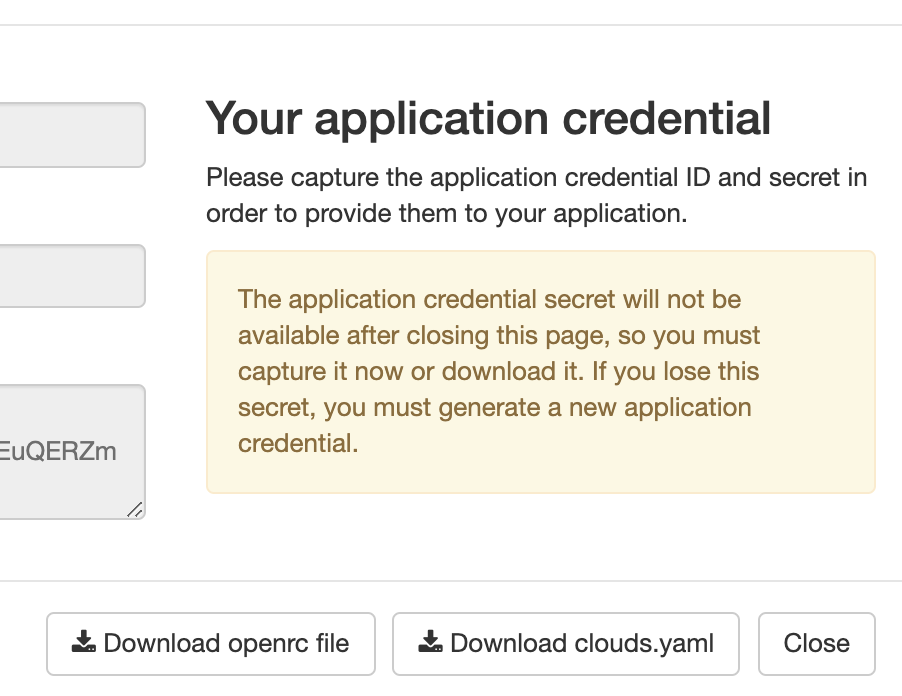 Place the clouds.yaml file in the /etc/prometheus directory. Once this is done, we can test the exporter: -

If you then want this to run when the hypervisor starts, define a SystemD unit file like the below: -

Enable and start the service: -

Update the Prometheus job configuration to use port 9180 (the openstack-exporter port) rather than 9100: -

We should now be able to see metadata for the discovered hypervisor (in this case the MicroStack instance) and also see that the openstack-exporter is up: - 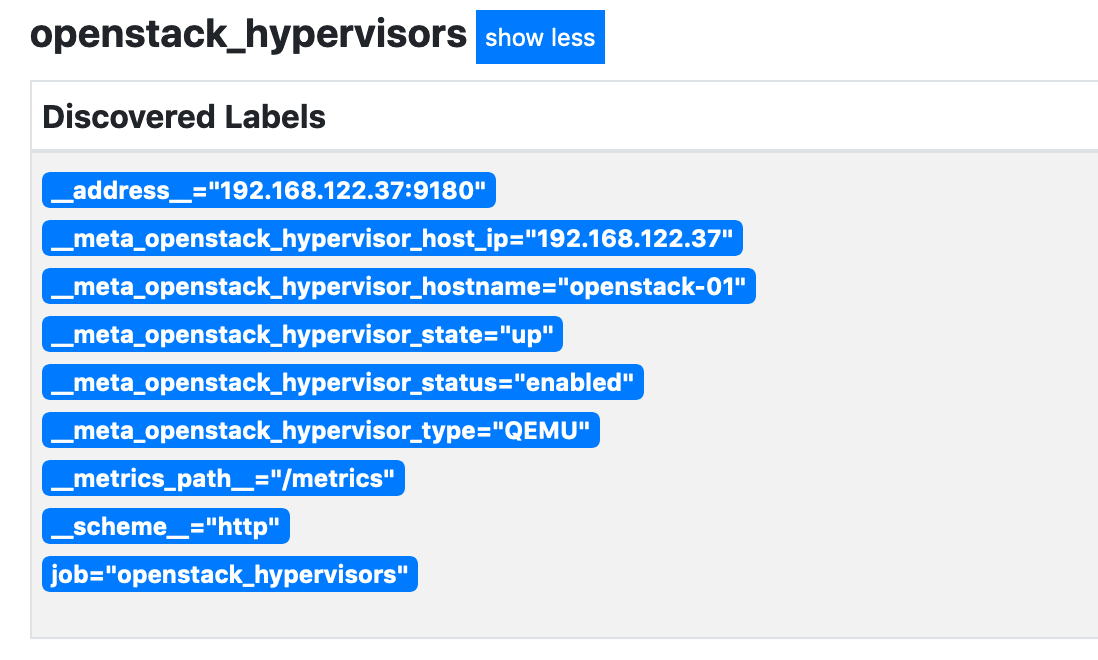 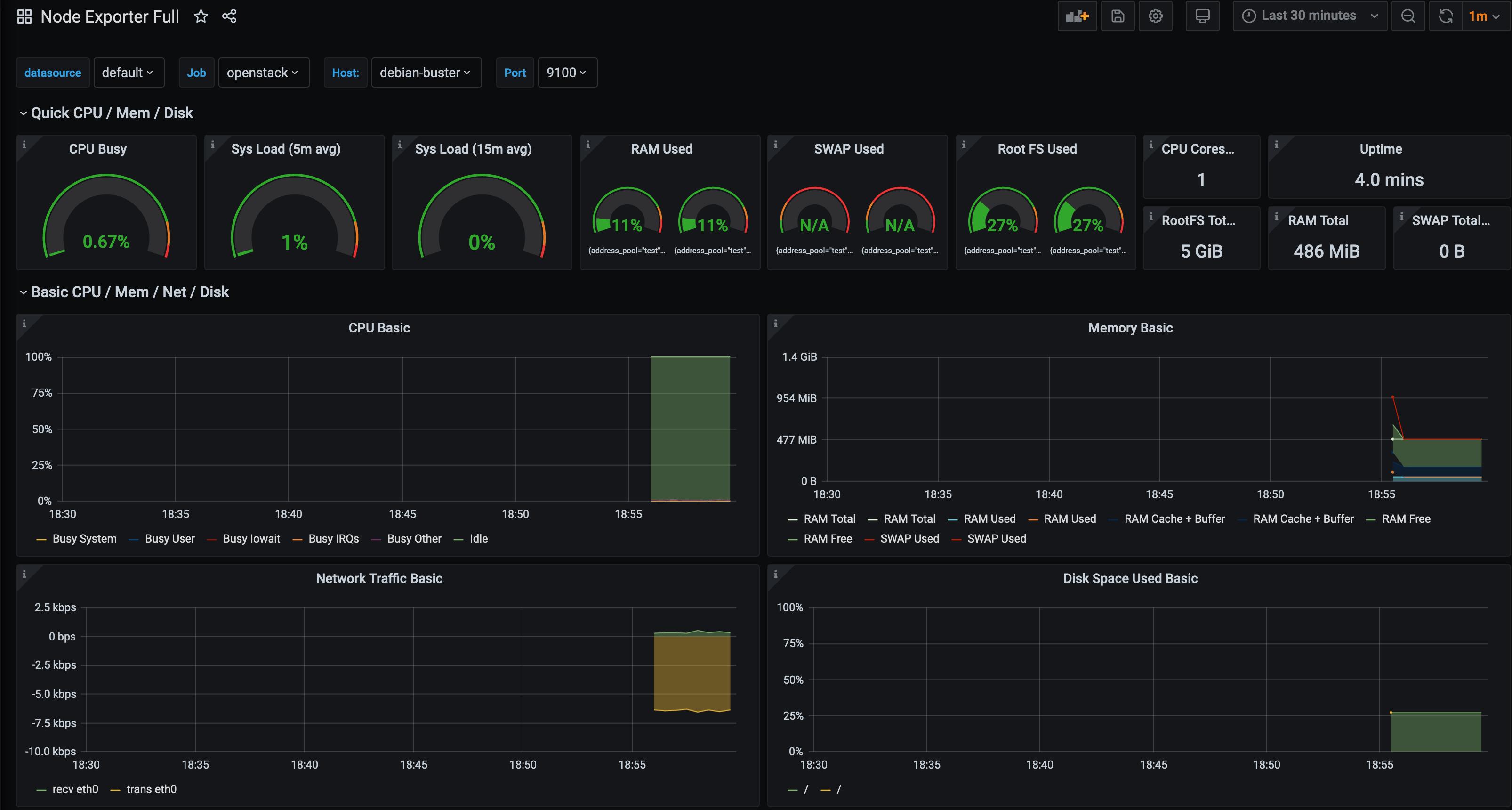 There is also a pre-existing dashboard for the openstack-exporter: - 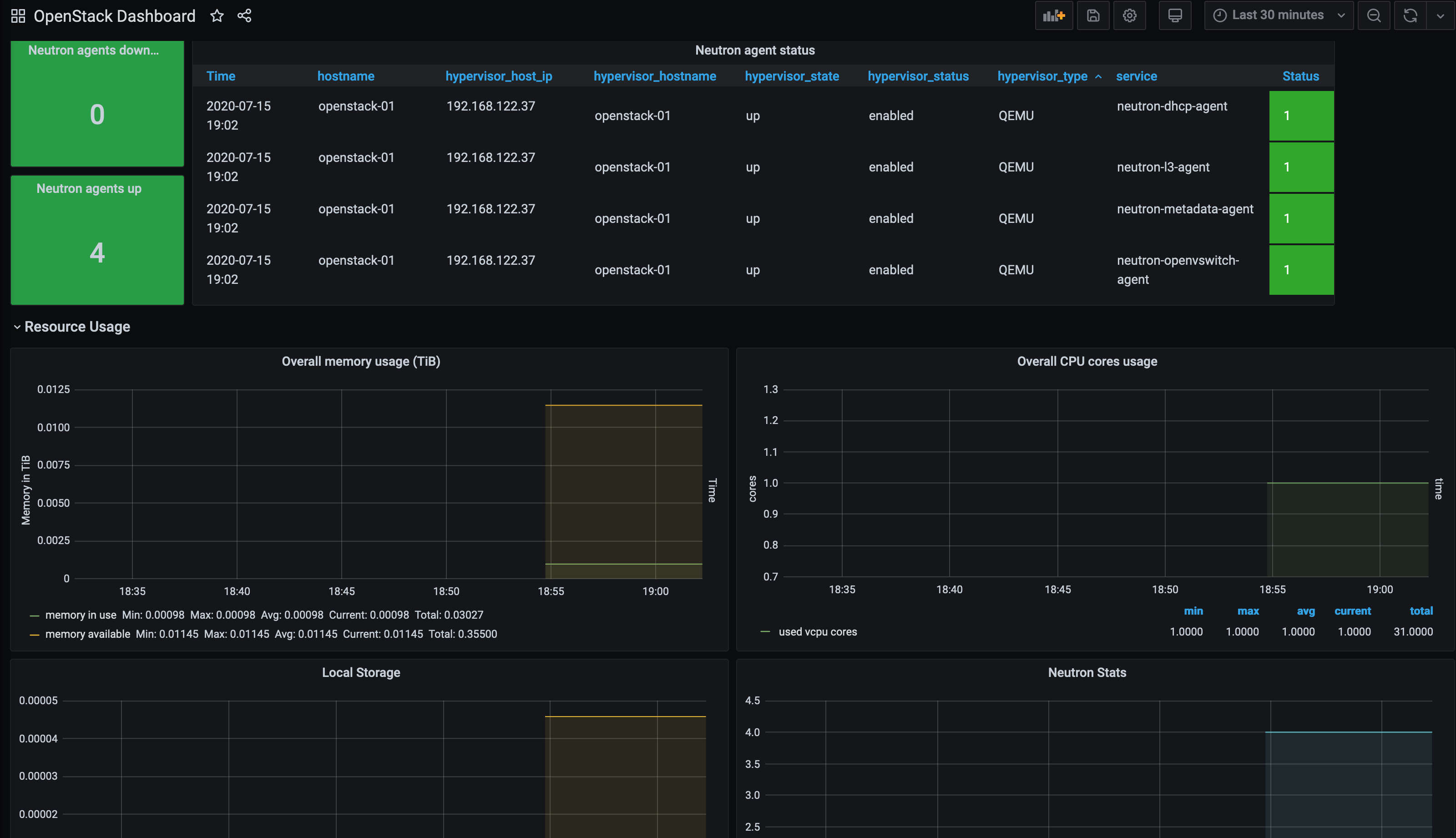 If you decide to use the Canonical OpenStack Exporter, then you could use this dashboard as a reference too.

For those who choose to own their cloud infrastructure, the OpenStack Service Discovery mechanism does provide a very flexible way of monitoring the hypervisors and instances.

Also, if you migrate from a public cloud provider to OpenStack, it is comforting to know you can manage and monitor your own cloud the same way (i.e. Terraform for deployment, Prometheus for monitoring).