This post is the next in the series on how I overhauled my personal infrastructure to make it easier to manage, make changes and integrate new applications.

This post is going to cover the choices of CI environments I could use, and why I chose Drone.

In terms of continuous integration, there are a number of different solutions to fit every kind of infrastructure, budget and need. For example, if all of your code is on GitHub, an obvious choice would be GitHub Actions. The same can be said of the Gitlab CI offering as well.

With this being the case, I needed to set out what I wanted in a CI tool: -

Before I found Drone, the two main contenders were Gitlab CI and Jenkins.

I only briefly considered Jenkins. Jenkins has it’s place, but it isn’t what I was after.

I’m not a huge fan of the Groovy language for writing pipelines. Also the resource usage can be quite significant, especially if one of the plugins is poorly written.

I have supported Jenkins at multiple businesses, and always run into issues with the plugin system. Upgrading one can break others, or upgrading one core plugin means every other plugin needs updating too.

Due to this, it was easy for me to rule out Jenkins.

Gitlab CI seemed like the obvious choice at this point. It also helps that I have integrated Gitlab CI before at one of my previous employers, so I already had a lot of experience with it.

However, after running just self-hosted Gitlab on a virtual machine on my infrastructure for a while, I found the resource usage to be a little too much. Even at idle, the machine used a lot of memory and CPU (at least compared to the other machines on my infrastructure).

I subsequently removed Gitlab from my personal infrastructure. With this being the case, I needed to move all my repositories from my self-hosted Gitlab instance into another Git system. Thankfully,

I already have a Gitea instance running on my infrastructure, so after migrating all the repositories to it, I began the search for a CI system that works with Gitea

What works with Gitea?

Gitea is a self-hosted Git service, providing a web interface, API and standard Git forge utilities (i.e. issues, pull requests, webhooks to external systems etc). However Gitea does not (at the time of writing) have an integrated CI system (unlike GitHub or Gitlab).

After a little research, I found the Awesome-Gitea repository. This contains a list of useful utilities that can integrate with Gitea, or augment the functionality. In this list were a few CI systems that integrate natively with Gitea.

The one that caught my eye was Drone. It is built in Go (so had a good chance of low resource usage), the pipelines are written in YAML, it is self-hosted, and integrates natively with Gitea.

I decided to give Drone a try.

Setting up the Drone Server

To install the server, Drone provide documentation for integration with GitHub, Gitlab, Gogs (what Gitea is forked from), Gitea, Bitbucket and Gitee.

The installation uses Docker, so you need to have a system that supports containers (Podman will probably work, although I haven’t tried it). You also to generate some secrets and an OAuth Application settings up in Gitea.

Creating the OAuth Application in Gitea

To create an OAuth application in Gitea, click on your user icon in the top right hand corner, and click settings: - 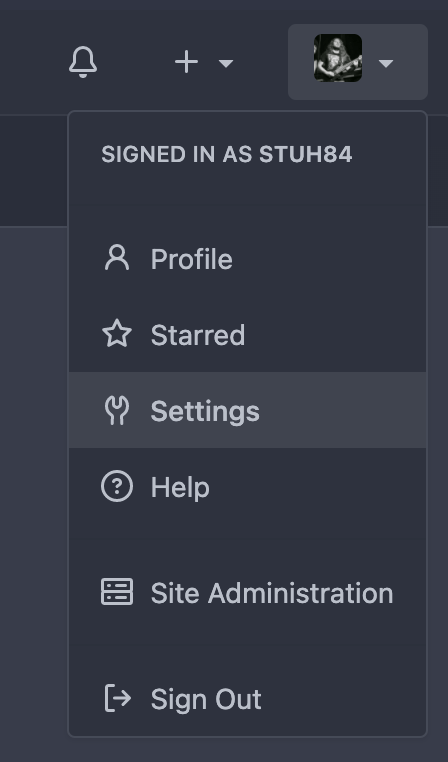 You should now see the option to Manage OAuth2 Applications. In the fields provided, add a name (e.g. drone-ci), and the URL Drone will run on followed by /login. In my home infrastructure, this is https://drone.noisepalace.co.uk, but in my demo lab, this is http://192.168.203.10/login: -

Click create application, save the Client ID and Client Secret provided, and we can now install Drone!

To install Drone, we need a machine that is running Docker. I am running this on a Debian Bullseye machine (Docker Installation docs here), but any machine that can run Docker, Podman, or other OCI-compatible runtimes will probably be fine.

As per the Drone documentation, you need to create a shared secret that will be used for communication between the Drone server and the runners. The documentation suggests to use OpenSSL like so: -

This isn’t a requirement though. If you want to use pwgen, a password store, or making up your own secret, all are fine.

The documentation then says to pull down the Drone image and then run a Docker command directly to install it.

Personally, I prefer using something like Docker Compose for this so that I always have the container declarations ready to use.

If you want to run this on Kubernetes you can, although I won’t detail that in this post (maybe in the future if and when I move my infrastructure to Kubernetes). My docker-compose.yml file looks like the below: - 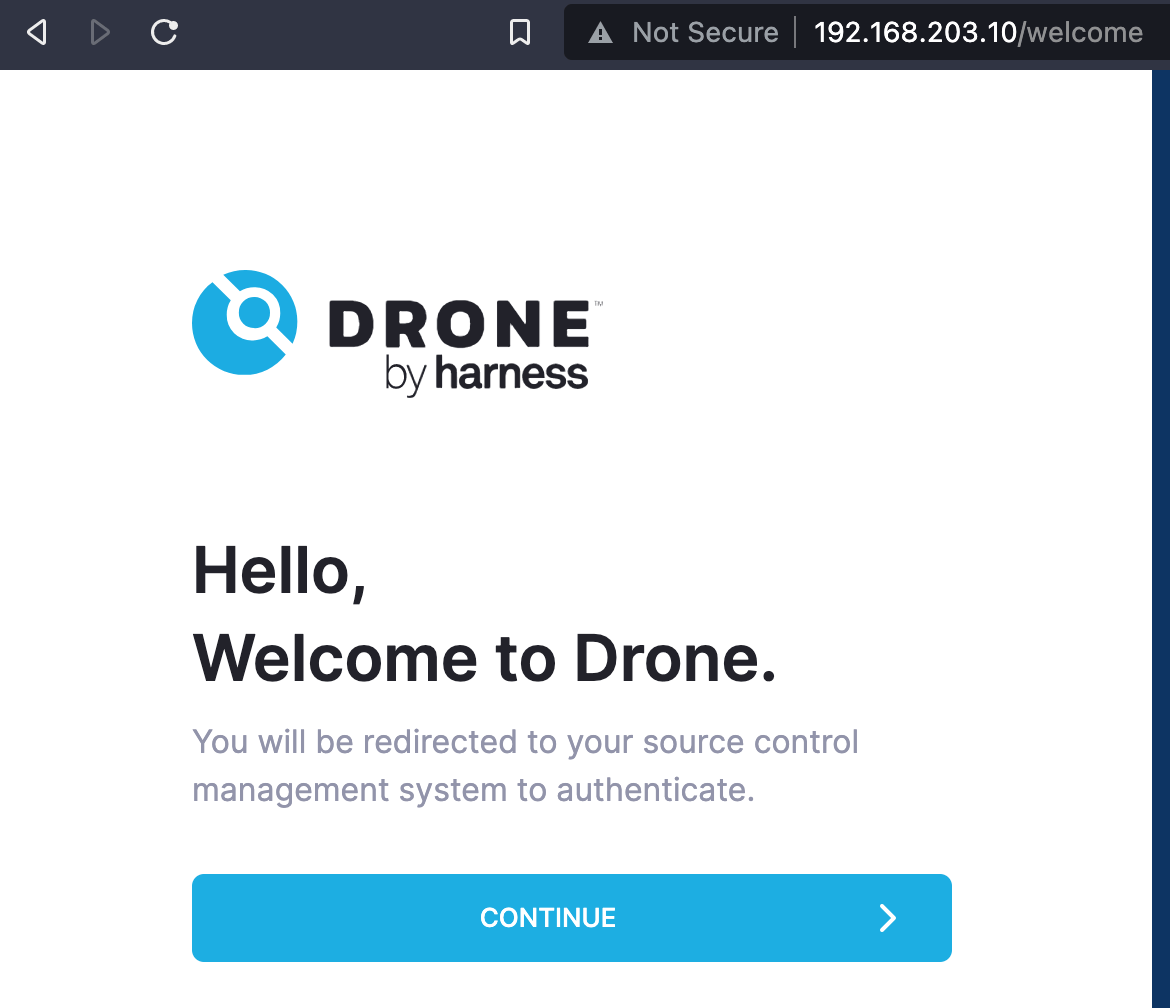 The nice part about setting up a Gitea OAuth2 application is that you can then login with your Gitea credentials. 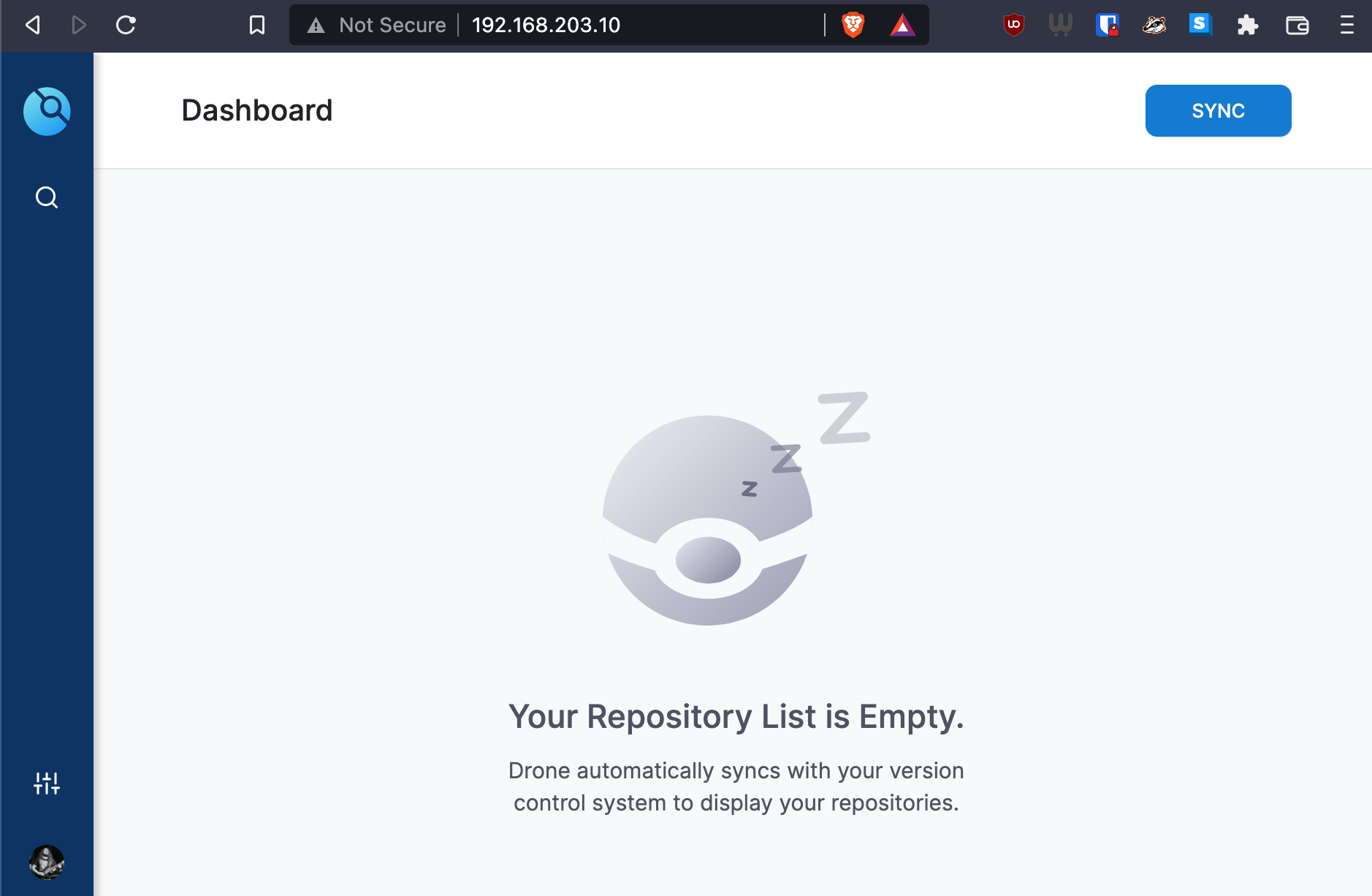 Now that we have the Drone server setup, we need some runners to run our CI jobs.

There are a few different options for runners with Drone. Some are infrastructure specific (e.g. Digital Ocean, AWS, MacStadium), whereas others are more generic. I currently use three different kinds of runners: -

As before, the Drone documentation uses Docker commands directly to create a runner. I again use Docker Compose to achieve this, so that everything is declared and stored in a Git repository for when I need it again in future.

Drone recommend that the runner runs on a different host from the Drone server itself.

At this point, we can run docker-compose up -d and see if it registers with the Drone server: -

Other architectures and operating systems are available from here.

Next, we need to create a configuration file for Drone. I place this in /etc/drone-runner-exec/config: -

The configuration is similar to what we used in the Docker runner section. The only difference here is that we also specify DRONE_RUNNER_LABELS. These aren’t strictly necessary, but you can use these labels to restrict jobs to execute on certain Runners.

For example, if I wanted to target my Salt Master server, I could use a label of salt:server, and then refer to that in the Drone CI jobs.

Once this is created, we can then create a service file. You can do this yourself, or the Exec Runner can do this for you by running: -

We can then check whether this is communicating with the Drone server like so: -

Jobs that use the SSH runner require either supplying a user and password, or an SSH key pair to access the machine in question. I created a key pair for this with: -

This creates the drone_ssh_key.pub and drone_ssh_key files which can then be used with the SSH runner. You just need to add the public key as an authorized key for whatever machines you want to access, at which point jobs can specify to use these keys to access the machines in question.

To setup the SSH runner, you again use Docker. The instructions refer to using Docker directly, and again I use Docker Compose for this, like so: -

We run this as before, placing a docker-compose.yaml file in a directory of your choice (I chose drone-ssh-runner) and then run docker-compose up -d. You should see the runner connect to the Drone server: -

Now that we have our runners, we can run some jobs!

Drone pipelines are configured using YAML, in a file called .drone.yml that sits in the base path of a repository. The format of this file is like the below: -

The format is quite similar to Gitlab CI, GitHub Actions, and other CI systems that use YAML to define the steps. We need to take a couple of prerequisite steps before we can run a pipeline in Drone though.

Create a repository in Gitea

If you currently have no repositories in Gitea, you will need to create one: - 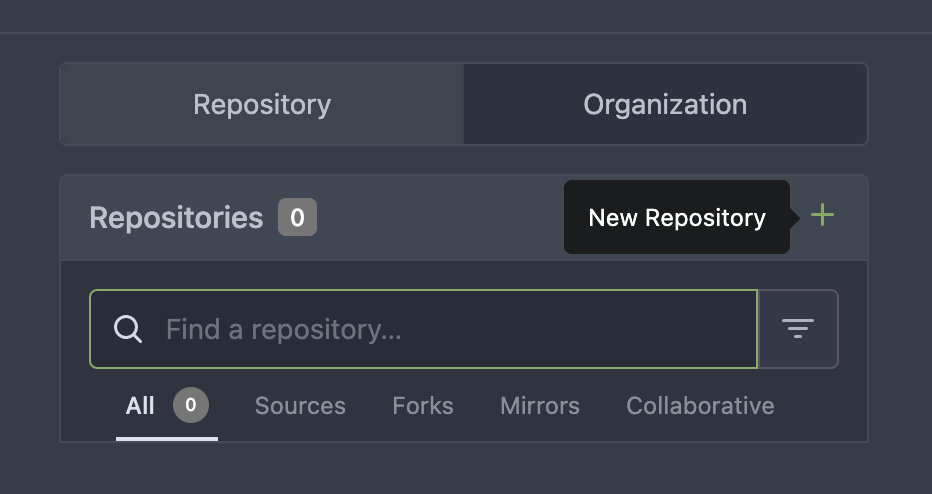 If Drone is not synchronized yet, you won’t see any repositories (or at least no new repositories if you already had some in your Gitea instance). Click on the Sync button in the top right hand corner, and Drone will get a list of all repositories that your user has access to in Gitea: -

After this, you should now see your repository appear: - 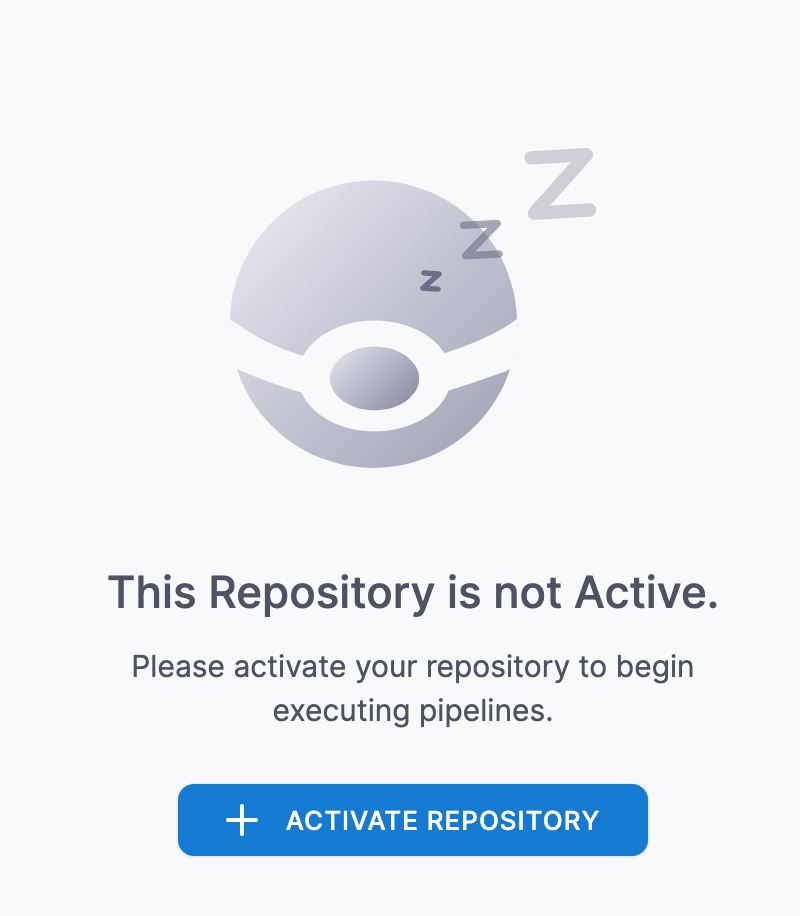 You can now change settings like timeouts on builds (in case a build goes on too long), disabling builds that come from Pull Requests (may be useful in public repositories to stop your resources being used by drive-by commits!) and more. However to just start builds, you don’t need to do anything else.

Add the .drone.yml file to the repo

You can now add the Drone pipeline file to the repository. We’ll use our example repository here: -

Now every file you add to the repository should now trigger a pipeline in Drone.

Lets commit a random file and see what happens: -

We should now see a build kick off in Drone: - 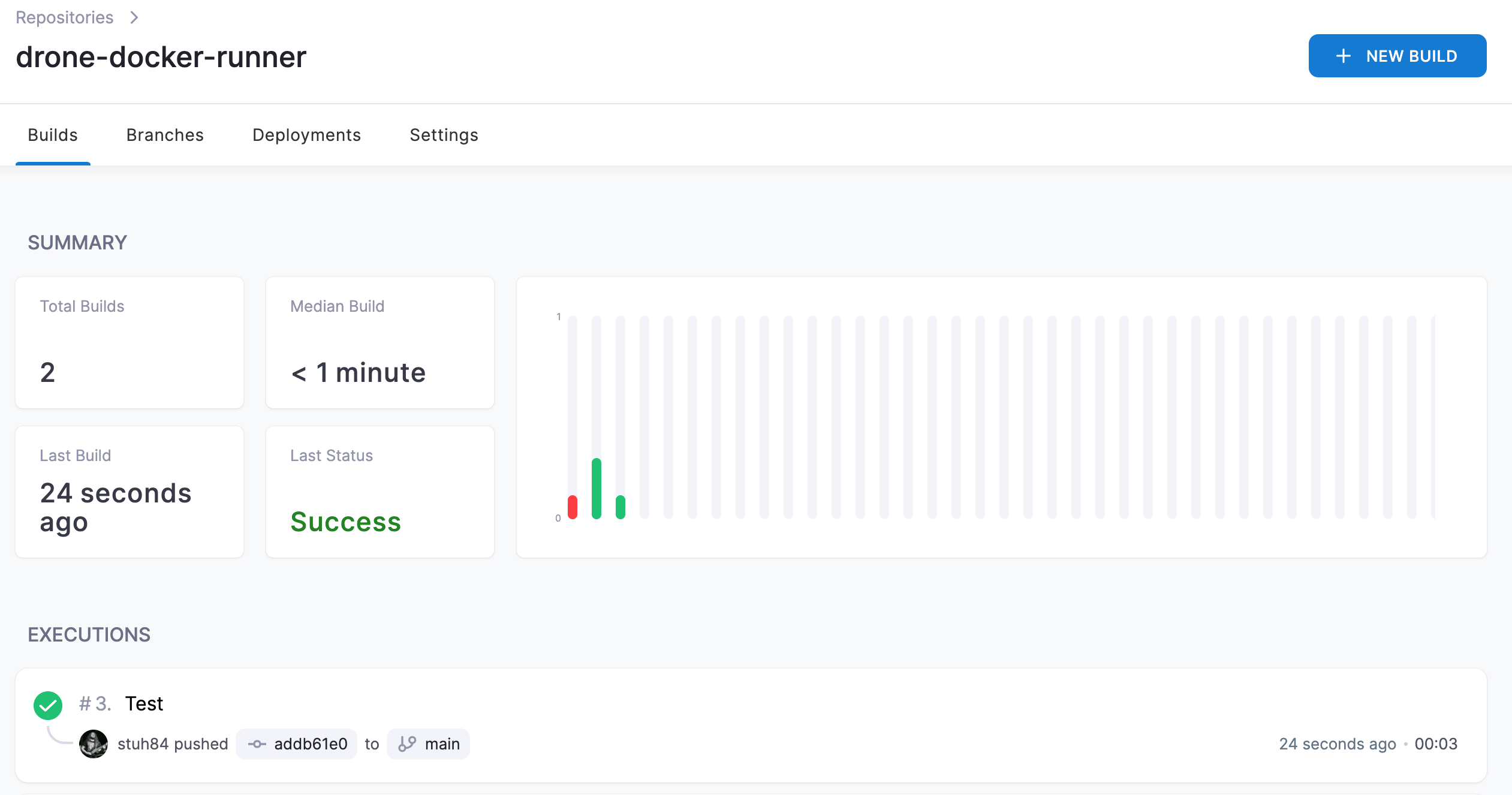 We can see the steps of the build too: -

Rather than going into too much detail in this post, I’m going to cover each kind of runner and pipeline that uses it in future posts.

The next four posts are going to cover how to create Drone pipelines for: -

As we go through of these posts, we’ll see how create pipelines, how to trigger them, how to take different steps based upon Pull Requests or merges to the main branch, and how through all of this Git now becomes the main method of defining and triggering changes on my infrastructure rather than manual intervention!